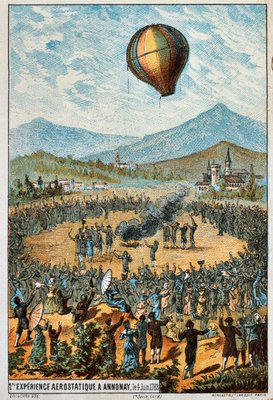 June 4, 1783 was an important date in aviation history. This was the first public flight of a hot air balloon by the Montgolfier brothers, Jacques-Étienne and Joseph Michel, in Annonay, France. The brothers were from a family of 16 children! Joseph mused about the possibility of hot air to inflate and lift objects. The purpose he had in mind was military, not for pleasure trips, however. He thought large balloons could be used to lift soldiers over siege barricades. He believed that there was a special gas within smoke called “levity.” Their first contraption, made of taffeta and light wood, flew over a mile.

For the next effort, the brothers created a sack, lined with layers of paper and held together with 1,800 buttons. It was time for a public demonstration. The June 4 flight lasted ten minutes, and again flew over a mile. Étienne headed to Paris where he worked with a wallpaper manufacturer to create a larger taffeta balloon coated with alum to make it fire retardant. The new model was also quite beautiful – blue decorated with gold motifs. The inventors launched a sheep, duck, and rooster to test the effect of altitude on living creatures. The flight took off from Versailles, in the presence of Louis XVI and his wife, Marie Antoinette. An even larger and more elaborate balloon followed for the first human flight. Étienne had the honor.

Hot air balloons were fascinating to the general public. Crowds gathered for each launch. The balloon design began to show up in home décor, on the backs of chairs and mantel clocks. The king even ennobled the Montgolfier family and allowed them to add “de” in front of their name.  The competition for a viable balloon was fierce – a British team was working on a hydrogen model at the same time. Ultimately, hydrogen balloons began to dominate the field, and hot air balloons were relegated to pleasure jaunts.

Today’s expression, dans l’air (dahn lair) literally means “in the air” but figuratively means “in the wind.” For instance, “there’s something magical in the wind when a hot air balloon goes by.” I always love to see them and even enjoyed a ride in one several years ago. They are so beautiful. In French, they are suitably referred to as “Montgolfiers.”

Patricia Gilbert is a French teacher. She's Canadian, lives in the United States, but dreams of living in France. Follow her on Instagram @Onequalitythefinest and on Twitter @1qualthefinest.
View all posts by Patricia Gilbert →
This entry was posted in History, People and tagged Annonay, Ballooning, Dans l’air, Hot air balloon, Jacques-Étienne Montgolfier, Joseph Michel Montgolfier, Montgolfier brothers. Bookmark the permalink.