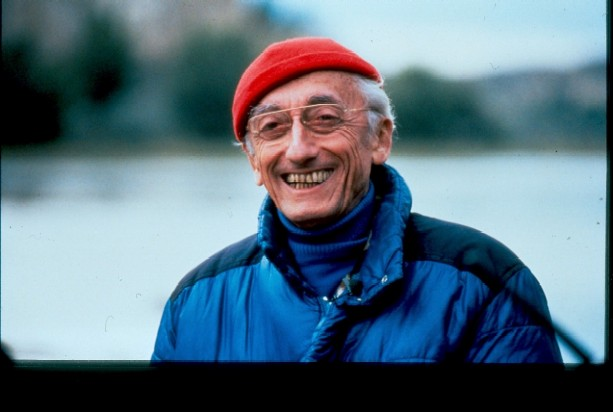 I was recently shocked to learn that my students have no clue who Jacques Cousteau was. I grew up on his TV specials about marine life, narrated by his gentle voice. Jacques-Yves Cousteau was born on June 11, 1910. He was a French naval officer, an early ecologist, filmmaker, innovator, scientist, explorer, photographer, author and researcher who studied the sea and all forms of acquatic life. He was elected to the Académie Française  in 1988 and made a Commandeur of the Légion d’honeur. His contribution includes 120 television documentaries, more than 50 books, and an active foundation that serves to further his interest in the environment. Here is one of the documentaries. Another indelible memory from my childhood is John Denver singing “Calypso,” the song named after Cousteau’s ship. He won a Palme d’Or at Cannes for his movie The Silent World, directed by fellow Frenchman Louis Malle. He added a regulator to the standard scuba gear, thus allowing for much longer dives, and was the first to try out the aqua-lung that transformed underwater exploration. He died on June 25, 1997, just two weeks after his 87th birthday.

My Father, the Captain: My Life with Jacques Cousteau