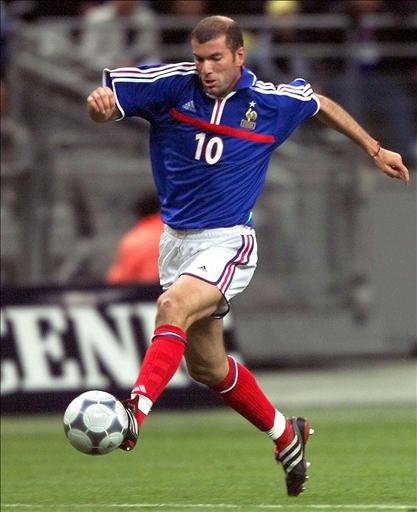 French soccer player Zinedine Zidane was born on June 23, 1972. His parents immigrated to Paris and then Marseille from Algeria before the Algerian War.  Known as Zizou to his millions of adoring fans, Zidane is considered to be one of the best players of the game in history. His professional career lasted from 1988 to 2006 during which he played for Cannes, Bordeaux, Juventus, and Real Madrid and scored 95 goals. He also played for the French national team from 1994 to 2006 where he scored an additional 31 goals. His career actually started when he got his first player’s license at age 10 and he began to play for junior leagues.

In the 1998 World Cup in France, Zidane scored 2 of France’s 3 goals in the final match against Brazil. He was a national hero and his image was projected onto the Arc de Triomphe. He again led France to glory in 2000 in the European Cup. When Zidane signed with Real Madrid in 2001, his four year contract was worth 75 million Euros. The national team floundered a bit in the early years of the new millennium. At the urging of selectionneur Raymond Domenech, Zidane agreed to come out of retirement for one last World Cup in 2006. He was instantly reinstated at team captain.

Before the final match against Italy started, Zidane was awarded the Golden Ball as the best player. I was in France with my daughter and we were transfixed by the match, even though we don’t normally follow any sports. It was impossible not to be swept up by the enthusiasm and pulsed all around us. People were painted bleu, blanc et rouge and singing “Allez les Bleus!” Early in the match, Zidane scored and it looked like another French World Cup victory was all but assured. The Italians tied. And then the unthinkable happened. After what was later revealed to be an insult to his sister, Zidane head-butted the Italian Materazzi and was sent off.

This wasn’t the first time Zidane was carded for violence during a match. He was banned from a match for head-butting in 1998 when he was playing for Juventus. That same year he was red-carded for stomping on a player in the 1998 World Cup, earning the distinction of being the first French player ever to receive this sanction during the prestigious competition. This time, however, the results were disastrous for France. They lost in overtime during penalty shootouts. Zidane’s three game suspension for the red card was converted to community service due to his retirement. I expected a great deal of anger against Zizou for possibly costing France the World Cup, but, to my astonishment, people seemed to accept that he had no honorable choice but to avenge his sister. The incident quickly gave rise to songs and parodies.  The pre-game song Zidane, il va marquer (Zidane, he’s going to score) became Zidane, il a frappé (Zidane, he hit) and that the Guignols (marionettes on a satirical French cable TV show) portrayed Zidane attacking anyone and anything based on supposed slights to his family. Today’s  expression, coup de boule (coo duh bool) is a slang terms that means “to head-butt”. A coup is any sort of blow and boule is slang for head or tête. The expression can be used with either boule or tête, but boule is more informal. Zidane’s amazing headers were also known by the same term, but they were probably best confined to scoring goals and not flattening other players.