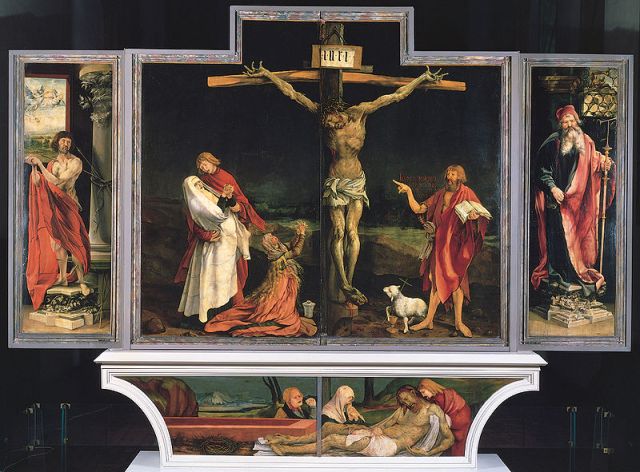 The Musée d’Unterlinden is the cultural highlight of Colmar. It’s housed in a former convent that dates back to the 13th century. Like all religious buildings in France, it was closed at the time of the Revolution. In 1849 it became a museum. Appropriately enough, it is the collection of religious art by Grünewald, Schongauer (see Ardoise vierge), and Isenmann that represents the chefs-d’oeuvre of the museum. The arcades of the former cloister permit access to the various rooms on the main level. The most important one is the former chapel that houses the Issenheim altarpiece created by Grünewald around 1500 to 1515. The massive, multi-part altarpiece was commissioned by a religious order that specialized in treating a particularly nasty scourge in the Middle Ages that came from eating rye infested by a fungus (see ergot). The hinged panels were designed so that different scenes could be shown on various days. The final compartment contained statues carved in a deep relief that were only visible once a year on the feast of Saint Anthony. The altarpiece is displayed as separate panels but there are hinged models on the walls so that you can see how the whole piece operated as a unity.

At the time of the Revolution, the Issenheim convent received exactly the same treatment as the Unterlinden. All overFrance, religious art was destroyed, stolen, and hidden. The panels of the Issenheim altarpiece (each of which is simply huge) were separated from one another. They were only reassembled in 1930. As for the artist, Grünewald, no one knows his date of birth, details of his life, his date of death, or even his real name! Experts have applied this name to paintings they believe to have come from the same painter. Some art historians refer to him as Master Mathis. There’s no disagreement, however, about which paintings are his due to the style, the use of color, and the depiction of light. The panels mix realism with symbolism, passion with humor, and poetry with pragmatism. Grünewald is particularly noted for the way he depicted hands. Those of Christ on the cross positively radiate his suffering.

The other rooms of the museum house an extremely diverse collection. There is a part of a beautiful gallo-roman mosaic floor from the 3rd century and there are 20th century paintings by Renoir and Picasso. It’s definitely worth a visit when you’re inColmar. The audio guide is even part of the 8€ admission price, which makes so much sense.

Today’s expression, il faut qu’une porte soit ouverte ou fermée (eel foe coon port swa oovert ew fairmay) literally means “a door must be open or closed.” Figuratively it means “there can be no middle course.” This isn’t strictly true, of course. The Issenheim altarpiece used to only be able to be opened one panel at a time. The expedient of taking it apart means that today all of it can be viewed and enjoyed at once, not just on infrequent feast days.