Posted on September 11, 2011 by Patricia Gilbert 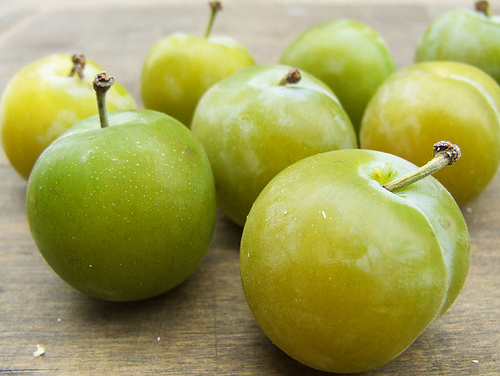 In North America, the plum has a much lowlier life than in France where they are honored in their many varieties. Reine-Claude (Greengage), quetsch, or mirabelles rule at late summer outdoor markets. The expression y aller pour des prunes (e allay poor day proons) means “to go there for plums.” This expression is actually meant to be a bit of a put-down. It dates back to the 12th century Crusades. French knights got their tails kicked in Damascus, but they stocked up on the novelty of plum trees to bring back home. When the king saw that this was all they had to show for an expensive military operation, he snapped, “don’t tell me you went there for plums!”

Plums have stayed with the times and improved in popularity since this inauspicious start in France. You can “friend” the Reine-Claude variety on Facebook, where it has its own page with over 2,000 amis. Hey, I’m human and that’s way more friends than my Facebook page for this blog! Yes, that’s a hint. Until September 15, 2011 Reine-Claude sponsoring a photo contest – take a picture of your lips that will make others smile and post it on their page. The photos with the most votes will win prizes worth 600 Euros. Pucker up!

Patricia Gilbert is a French teacher. She's Canadian, lives in the United States, but dreams of living in France. Follow her on Instagram @Onequalitythefinest and on Twitter @1qualthefinest.
View all posts by Patricia Gilbert →
This entry was posted in Cuisine and tagged mirabelle, plums, quetsch, Reine-Claude, y aller pour des prunes. Bookmark the permalink.