Posted on October 9, 2011 by Patricia Gilbert 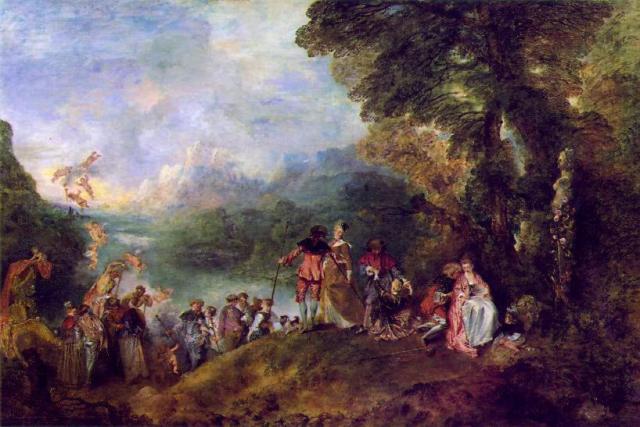 French Rococo painter Antoine Watteau was born on October 10, 1684. He was born in humble, provincial circumstances and lived a short, illness-plagued life, yet his influence on European art was enormous. Watteau invented the fête galante (fet galahnt) or “courtship party” – a totally brilliant way to have his cake and eat it too. He was paid by wealthy bourgeois to produce portraits, but he coveted acceptance by the prestigious Académie de Beaux-Arts that only respected allegorical paintings. He combined the two, painting his aristocratic clients frolicking in mythological scenes. Everyone was happy. He was accepted into the Académie in 1712 as a full member, so good was he considered to be.  The painting “L’embarquement pour Cythère” or the “Embarcation for Cythera,” above, was his reception piece and it hangs in the Louvre today. Watteau died on July 18, 1721, probably of a form of tuberculosis.

Patricia Gilbert is a French teacher. She's Canadian, lives in the United States, but dreams of living in France. Follow her on Instagram @Onequalitythefinest and on Twitter @1qualthefinest.
View all posts by Patricia Gilbert →
This entry was posted in Art and tagged Academie de Beaux-Arts, Antoine Watteau, Embarcation for Cythera, fête gallante, L'embarquement pour Cythère, Louvre, Rococo. Bookmark the permalink.