Posted on November 4, 2011 by Patricia Gilbert 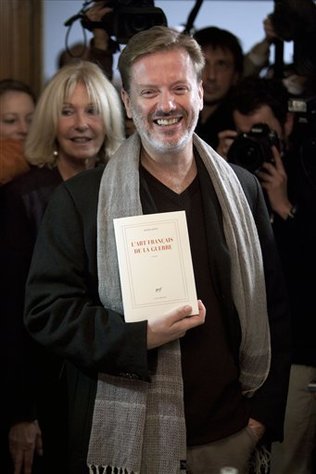 On November 3, 2011, Alexis Jenni won France’s most prestigious literary prize, the Goncourt. Jenni is a 48 year old high-school biology teacher from Lyon and a father of three. He thought of himself as “un écrivain du dimanche” (uhn ek-ri-vahn due deemansh) or “a Sunday writer.” Jenni sent his manuscript L’Art français de la guerre (The French Art of War) to the premier publisher, Gallimard, in March where it was snapped up.  The Goncourt committee was similarly decisive, selecting Jenni’s book in the first round of voting, which almost never happens. The 600+ page novel tells the story of a French paratrooper who fought in the colonial wars in Indochina and Algeria. Jenni worked on it for five years in local cafés. He seems bemused and delighted with his “overnight” success. You can follow his blog, “Voyages pas très loin” at www.Jalexis2.blogspot.com .

Patricia Gilbert is a French teacher. She's Canadian, lives in the United States, but dreams of living in France. Follow her on Instagram @Onequalitythefinest and on Twitter @1qualthefinest.
View all posts by Patricia Gilbert →
This entry was posted in Fashion and tagged Alexis Jenni, Gallimard, L'Art français de la guerre, Prix Goncourt, The French Art of War, Un écrivain du dimanche. Bookmark the permalink.