Posted on November 27, 2011 by Patricia Gilbert 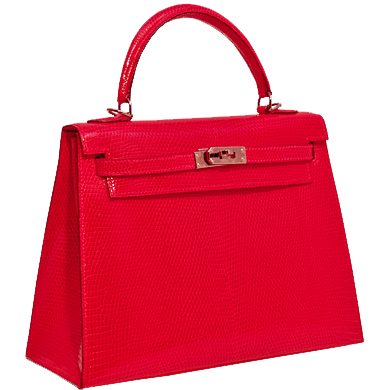 On the second day of Christmas, my true love gave to me…an Hermès (airmez) Kelly bag.

The iconic purse was introduced by Hermès in 1935 as the sac à dépêches or dispatches bag. It gained its new name when the former Grace Kelly used one to cover her baby bump in 1956. The nickname caught on with the public and the company was savvy enough to adopt it officially. It caused me pain when Kate Hudson’s character dropped a $16,000 version off the Eiffel Tower in Le Divorce. Yes, I said $16,000. They start at just under $5,000 because they require 16 hours of hand-stitching and premium hides. I’ve seen them for as much as $80,000, for Kellys made of rare skins and trimmed in platinum and diamonds.

If you’d like a Kelly bag of your own, you’ll have to select a pre-owned one at the moment. The waiting list has been closed to new orders to allow the workrooms to catch up on the backorders. 1stdibs usually has a few to choose from. If your pre-cherished Kelly shows a little wear, you can take it to Hermès for reconditioning. So despair not, Santa, you can still make my Christmas wishes come true.

Today’s expression, mettre à sac (metruh ah sack) means “to put to sack,” but not le sac Kelly, this time. It’s the pillaging type where the bad guys take everything. I’m not after everything, just one very lovely bag, preferably in red. I’ll leave the choice of skin up to Santa. I’m reasonable, after all.

Things a Woman Should Know About Style

For all 12 days of Christmas:

Patricia Gilbert is a French teacher. She's Canadian, lives in the United States, but dreams of living in France. Follow her on Instagram @Onequalitythefinest and on Twitter @1qualthefinest.
View all posts by Patricia Gilbert →
This entry was posted in Fashion and tagged 1stdibs, Grace Kelly, Hermès Kelly bag, Le Divorce, mettre à sac, Things a Woman Should Know About Style. Bookmark the permalink.