Posted on December 11, 2011 by Patricia Gilbert 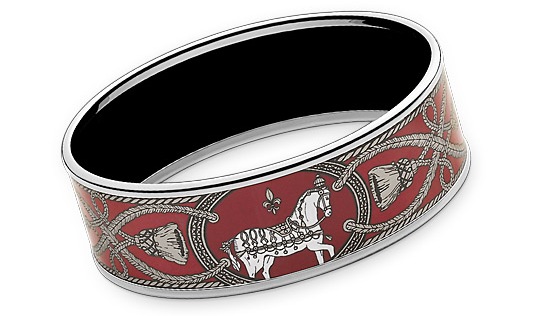 On the seventh day of Christmas, my true love gave to me…an Hermès enameled printed bracelet.

Once again, I’m here to help my good friend Santa. Hermès bracelets come in widths from half an inch to 2.5 inches and in 11 background colors. Talk about selection! They often have an equestrian theme, like the famous scarves, which is appropriate considering the company’s history. Hermès was founded in 1837 and established itself as a harness maker to the nobility.  Their logo remains a horse-drawn carriage. In 1880, the second generation of the family moved the headquarters to their present location at 24, rue du Faubourg Saint-Honoré in Paris. Eventually, the line expanded to include leather accessories, purses, scarves, jewelry, and watches. 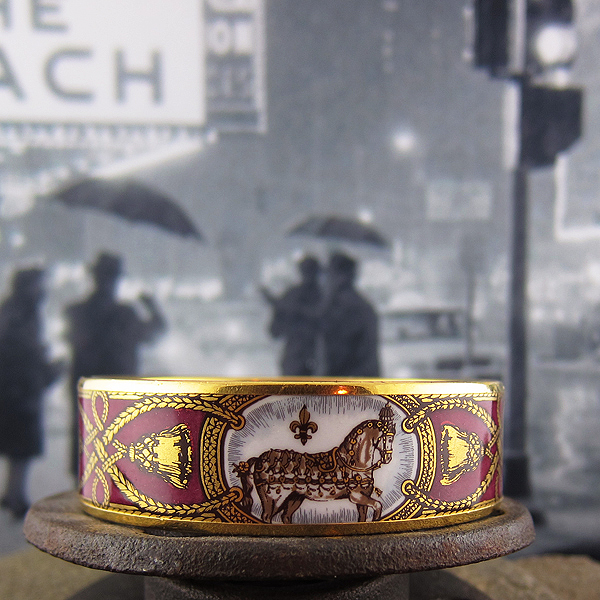 Today’s expression, nettoyer les écuries d’Augias (net-toy-ay layz ay-cure-ees doe-gee-as) also has an equestrian theme. It means “to clean the stables of Augias.” In Greek mythology, Heracles was required to clean out the vast stables of King Augias in a single day, which he accomplished by diverting a river. Since Hermès was the messenger to the gods and guide to the Underworld in Greek mythology, a saying about another myth fits rather well. They’ve stayed in business for almost 200 years by expanding and changing, while maintaining the highest standards of workmanship. And Santa, when you’re picking a bracelet, I’m very partial to red.

Patricia Gilbert is a French teacher. She's Canadian, lives in the United States, but dreams of living in France. Follow her on Instagram @Onequalitythefinest and on Twitter @1qualthefinest.
View all posts by Patricia Gilbert →
This entry was posted in Jewelry and tagged gift suggestion, Hermès enameled printed bracelet, luxury goods, nettoyer les écuries d’Augias. Bookmark the permalink.