Posted on December 20, 2011 by Patricia Gilbert 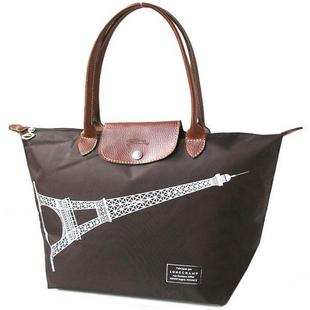 On the tenth day of Christmas, my true love gave to me…a Longchamp Le Pliage tote.

Well, we’re getting near the end of my Christmas list. Since it’s almost the big day, that’s a good thing. Today’s gift suggestion is a true French classic. A leather-trimmed Longchamp Le Pliage tote has been a real workhorse since 1993. On the subway filled with books for a student, in the park toting a novel, gigantic sunglasses, and a bottle of mineral water, or running to a Fashion Week shoot cradling a camera and the latest issue of Vogue, Le Pliage tote will be there for you in unpretentious style. 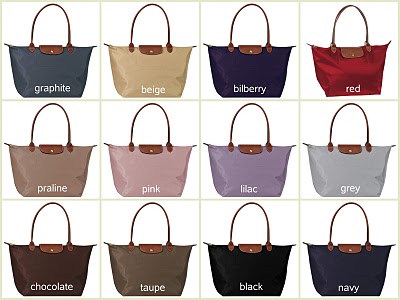 Available in 12 standard colors and some novelty trims, such as the feathers for Fall 2011, this over-the-shoulder bag expands from 6” x 10.5” to 12” x 19 ¾”. Which color? Bilberry, grape, and red are particularly awesome and black is always chic. I’m quite partial to the Eiffel Tower version, although it’s really only meant for tourists. I’ve never seen a real Parisian carrying one. Still, I’m tempted. Surprise me, Santa. (Update: as of Fall 2013, Le Pliage is now available in leather!) 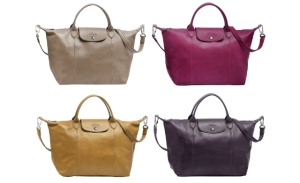 Le Pliage means foldIng. Which relates to today’s expression, prendre le pli de (prendruh luh plee duh). This literally means “to take the fold of” but figuratively means “to get in the habit of.”  A Longchamp tote bag will fold perfectly time after time and carrying one everywhere you go will quickly become habit forming.

Patricia Gilbert is a French teacher. She's Canadian, lives in the United States, but dreams of living in France. Follow her on Instagram @Onequalitythefinest and on Twitter @1qualthefinest.
View all posts by Patricia Gilbert →
This entry was posted in Fashion and tagged French Chic: How to Dress Like a Frenchwoman, gift idea, gift suggestion, Longchamp Le Pliage tote, luxury gift suggestions, luxury goods, prendre le pli de. Bookmark the permalink.