Posted on December 21, 2011 by Patricia Gilbert 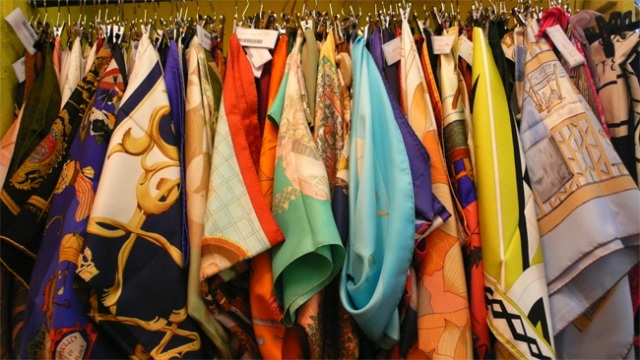 On the eleventh day of Christmas, my true love gave to me…an Hermès carré.

This is really a classy and classic gift, part of the Hermès product line since 1928. What makes a 35”carré (carré means square) or scarf worth about US$400? Hermès oversees every step of the labor intensive process at their factory just for scarves in Lyon: from spinning the thread from 250 silk worm cocoons per scarf to hand rolling and sewing the edges. Two collections are released each year as well as some re-issues of favorites from the past, many based on the company’s familiar equestrian motifs. Up to 46 naturally created colors are individually screened onto the fabric.

If you’re worried that you might look like une femme d’une certaine âge, you don’t have to look like Queen Elizabeth in your scarf either.  Hermès published a boxed set of “playing cards” called Jouez avec votre carré Hermès (Playtime with your Hermès scarf). It used to be available as a PDF download, but I can no longer find it. If anyone out there has access, please share! Also, you could check out my blog entry Le mode d’emploi for 25 scarf-tying ideas. If Santa’s budget doesn’t stretch to $400, since Hermès carrés are so well made, they often show up pre-loved on e-Bay and other re-sale sites where savvy Santa may be able to snag one for 50% to 75% off list price.

Today’s expression mettre la tête au carré à quelqu’un (metruh lah tet owe caray ah kelkun) literally means “to put someone’s head on the square,” which is a really clunky way of saying what it really means, “to beat someone’s head in.” Santa, you won’t need to beat your head against the wall or a square for ideas for me. Just follow the blog. I’m here to help you.

The Hermes Scarf: History and Mystique

Patricia Gilbert is a French teacher. She's Canadian, lives in the United States, but dreams of living in France. Follow her on Instagram @Onequalitythefinest and on Twitter @1qualthefinest.
View all posts by Patricia Gilbert →
This entry was posted in Fashion and tagged Hermès, Hermès carré, Hermes scarf, Jouez avec votre carré Hermès, mettre la tête au carré à quelqu’un, Playtime with your Hermès scarf, The Hermes Scarf: History and Mystique. Bookmark the permalink.