Posted on February 29, 2012 by Patricia Gilbert

Nice is one of my favorite cities in France. There are traces that date back more than 2,350 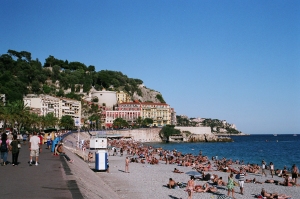 years, but its French history only goes back to 1860, when Sardinia handed it over as a thank-you present for support in a war against Austria. It was soon a popular winter resort for well-heeled aristocrats from around the world. La Promenade des Anglaises, the broad boulevard along the coast, allowed the well-dressed sun-seekers to stroll in comfort. It used to be paved in marble, now it’s a little more prosaic, but the pergolas and benches make a very pleasant perch to enjoy the view over that incredibly blue sea.

. The walk up the hill is pleasant and the views are – you guessed it – breathtaking. The beach on la Baie des Anges (the Bay of Angels) is made up of small stones, known as galets. One of the most impressive hotels is the Negresco that includes a spectacular stained glass ceiling in one of the reception rooms.

shops and homes known as Vieux (Old) Nice. The photo on the right shows flavored salt from a small shop. While you’re in the market, look for the stand selling socca, a chickpea flour pancake. Of course, a salade Niçoise is the obvious choice. While you’re there, don’t miss the incredible Russian Orthodox Church.

In honor of la Promenade des Anglaises and the English tourists who flocked here for the great winter weather, today’s expression is filer à l’anglaise (feelay ah langlez) literally means “to leave in the English style.” This means to sneak off, but what’s really hysterical is that the equivalent French expression is “to take French leave.” The Napoleonic era hostility between France and England certainly left its mark. The beauty of Nice will leave its mark on you too.