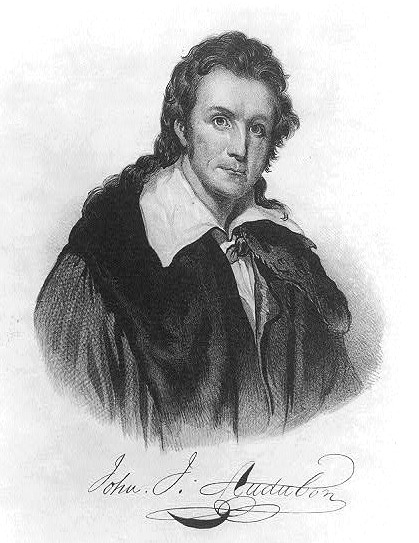 French-American Jean-Jacques Audubon was born on April 26, 1785. He is known for his incredibly detailed bird paintings, published as Birds of North America (1827-1839). He was born in Saint-Domingue, the former French colony now known as Haiti. His father was a plantation owner, naval officer and privateer originally from Brittany. Due to slave unrest, the father decided to sell part of his holding in the Caribbean and buy a large estate near Philadelphia. The restless Audubon decided to move back to France. Father and son shared a wondering admiration for birdsand the natural world. When Jean-Jacques decided to immigrate to America at the age of 18, he anglicized his name to John James. The plan was for young Audubon to manage a lead mine on the Pennsylvania property.

He embarked upon a serious course of study of the birds and animals around his property. Audubon also became skilled at taxidermy to preserve the wildlife he studied with view to creating a museum of Natural History similar to the one in Philadelphia. His business expanded westward, giving him the chance to draw more birds and other woodland creatures. He gave up his business in 1811 and his French citizenship in 1812. Life was not always easy for him. At times he supported his family by drawing portraits of people who had died and giving drawing lessons. He was jailed as a debtor. Rats ate 200 of his bird paintings, forcing him to start his project to draw the birds of North America all over again. The drawings absorbed 14 years of his life.

To get his pictures published, Audubon sailed to England to have plates for his paintings engraved. The cost of printing was enormous – over $2,000,000 by today’s standards – paid for by advance subscriptions and Audubon’s personal investment. Colorists hand-tinted each plate. His work caused a sensation, containing over 700 bird species in total. The kings of France and England both subscribed. His book was declared the greatest picture book ever made. In 2010, a copy of the first edition of Birds of America sold for $11.5 million, a record price for a book. Audubon died on January 27, 1851.

Today’s expression, des noms d’oiseaux (day nom dwazoe) literally means “names of birds.” It’s a euphemism for calling someone rude names. Maybe we should try that at the United Nations. How long would we keep a straight face yelling “Hummingbird!” “Chicadee!” at one another? Could world peace be far behind?

Patricia Gilbert is a French teacher. She's Canadian, lives in the United States, but dreams of living in France. Follow her on Instagram @Onequalitythefinest and on Twitter @1qualthefinest.
View all posts by Patricia Gilbert →
This entry was posted in Art and tagged des noms d’oiseaux, Jean-Jacques Audubon, John James Audubon, The Birds of North America (1827-1839). Bookmark the permalink.