The Château d’Amboise traces its roots to medieval times. It was appropriated by the 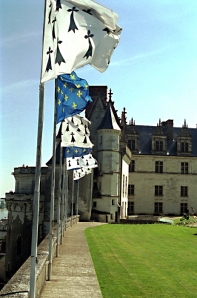 crown in the 15th century when Louis d’Amboise was convicted of plotting against the king. The French kings really liked Amboise and invested extensively in renovations over the years. Charles VIII imported Italian stonemasons to create France’s first Italianate château. He was an unusually tall king and died when he inadvertently smashed his forehead on a lintel. When I visited there, the guide explained that, although people are generally taller today than they were in the Middle Ages, the lintels of castles were lower as a defensive measure. A knight in full armor would have to bend over to enter the doorway, slowing him down enough for the defenders of the castle to get a good whack at him, or even toppling him over totally if he over-balanced. The lintels weren’t supposed to finish off the king who lived in the chateau, however. Ooops.

François I brought a rather famous guest to live in the neighborhood; he gave nearby Clos Lucé to Leonardo da Vinci where he lived out the rest of his days. The Italian genius is buried in the chapel on the château grounds. Another famous resident of Amboise was Mary Queen of Scots who spent her childhood here.

A bloody massacre of about 1,200 Hugenots in 1560 marked the beginning of the end of the château’s time of favor. The bodies were hung from the walls as a warning to others. The overpowering stench drove the court from Amboise. It eventually became a royal prison during the Fronde. Nicolas Fouquet was imprisoned here for a time.  Much of the château was destroyed during the Revolution and under Napoleon. It was essentially used as a prison again in 1848 when the Emir Abd El-Kader, who resisted French colonization of Algeria was detained here with his family and retinue. Today the chateau is maintained by the Comte de Paris.

Today’s expression, casser la tete à quelqu’un (cassay lah tet ah kelkun) literally means “to break someone’s head.” It means to overwhelm someone by talking too much or making too much noise. Unfortunately for Charles VIII, his head breaking was literal rather than figurative.

Patricia Gilbert is a French teacher. She's Canadian, lives in the United States, but dreams of living in France. Follow her on Instagram @Onequalitythefinest and on Twitter @1qualthefinest.
View all posts by Patricia Gilbert →
This entry was posted in Travel and tagged casser la tete à quelqu’un, Charles VIII, Château of Amboise, Francois I, Leonardo da Vinci, Loire valley. Bookmark the permalink.