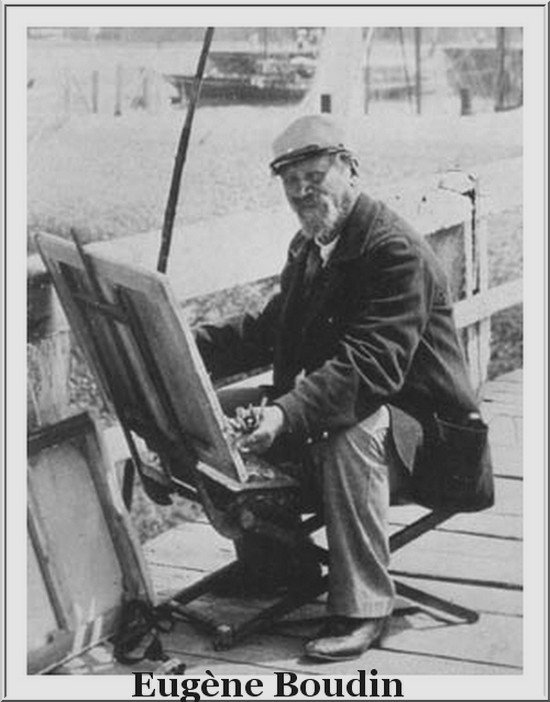 French landscape painter Eugène Boudin was born on July 12, 1824. The son of a sailor, he was born and raised in the seaside of Normandy and spent his life capturing the effects of sun and cloud. Dutch painter Johan Jongkind urged Boudin to move his easel outside and to paint en plein air, a radical idea at the time. He met Claude Monet when he placed some of his painting for sale in the gallery Boudin owned. The two became lifelong friends and painting companions. Later, Monet credited Boudin with his own decisive movement out of the studio.

Boudin joined his Impressionist friends in the Salon des refusés in 1874, but he always considered himself to be much more main-stream. Although he is totally overshadowed by the Impressionists today, Boudin was esteemed to be an excellent artist, winning a third place medal at the 1881 Salon and a gold medal at the 1889 Exposition Universelle (that’s when the Eiffel Tower was introduced). He made such a good living as an artist that he was able to travel extensively.

Ostensibly, Charles Baudelaire and Camille Corot said, “Vous êtes le maître du ciel” (vooz et luh metruh due see-el), which means “You are the master of the sky,” in tribute to Boudin’s skill with sea and landscapes. He was made a chevalier of the Légion d’honneur in 1892. Boudin died on August 8, 1898 and a prize is given annually in his name by the Société National des Beaux-Arts. The Boudin museum in Honfleur pays tribute to his work and to his influence on a whole generation of French artists who called him friend.

Patricia Gilbert is a French teacher. She's Canadian, lives in the United States, but dreams of living in France. Follow her on Instagram @Onequalitythefinest and on Twitter @1qualthefinest.
View all posts by Patricia Gilbert →
This entry was posted in Art and tagged Boudin, Claude Monet, Eugène Boudin, Impressionism, Vous êtes le maître du ciel. Bookmark the permalink.