Posted on September 14, 2012 by Patricia Gilbert

I wrote the other day about learning about the making of the beautiful Hermès carrés at the Festival des Métiers in New York. While that was undoubedly the biggest draw for the crowd, there was also plenty of interesting work being done by other artisans.

The watch maker works in Geneva, the centre of the world for luxury time piece manufacture. He had the movements of several watches open so we could see all the minuscule parts. He showed us the rubies that are inside and explained their function in reducing friction. Any jewel would do, but the rubies are traditional. My watch loses about two minutes a day and I would have loved to have him take a look at it. If it were a Hermès watch, he could have, as they have a service guarantee for as long as that watch is in production.

The glass etcher (not pictured) applied gold to the lip of delicate stemwear before it was fired. If she makes a mistake, the gold is wiped off on a cloth and then the cloth will be burned to recuperate the precious metal.

The jeweler used a powerful magnifier to set diamonds side-by-side in gold. Like all of the artisans, she had a translator by her side giving a simultaneous explanation in English, but I really

enjoyed the chance to speak to the artisans in French. She told me that her four-year apprenticeship had included work terms as Chanel and Chaumet before coming to Hermès.

The lady who sewed the ties with precise stitches can finish one in 8-10 minutes. The silk for the ties is printed in the same exacting way as the scarves,

including the lining, so that the color match is perfect.

The perfect tie needs the perfect shirt; we learned how to sew on a button the Hermès way (with a shank, of course, and backed with fabric). What interested my husband a lot more was the quality of the fabric. Think how beautiful their scarves feel, and then imagine a dress shirt woven with that silk.

The saddle maker (not pictured) had crafted the purses and other fine leather goods before making the switch to four-legged clients. He said the horses had to be his customers first, the riders second in order to make the perfect saddle. The finished one on display was a work of art; the leather was as soft as a baby’s skin. It made me want to take up horseback riding, just to have an excuse to own such a thing. 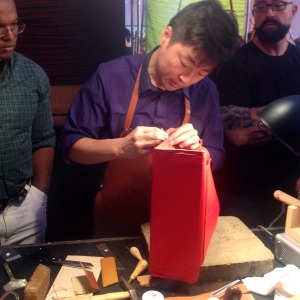 I was sure the purse maker was sewing that lovely red bag just for me. Apparently he didn’t get the memo, however. Looks like I’ll have to pick one of the supple hides they had on display for my own bag.

Whether of leather, glass, or gold, all of the artisans at Hermès are producing luxury goods de première qualité (duh prem-e-air kal-e-tay), of the finest quality. If you can see this exhibit in Houston or San Francisco, I’m sure you’ll enjoy it.

The Hermès Scarf: History and Mystique

Patricia Gilbert is a French teacher. She's Canadian, lives in the United States, but dreams of living in France. Follow her on Instagram @Onequalitythefinest and on Twitter @1qualthefinest.
View all posts by Patricia Gilbert →
This entry was posted in Fashion, Jewelry and tagged Artisan, de première qualité, Festival des Métiers, Hermès, Hermès Festival des Métiers. Bookmark the permalink.