Posted on October 1, 2012 by Patricia Gilbert

I’ve mentioned in the past how much I enjoy and benefit from the website My Little Paris. 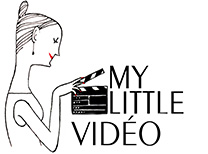 Now they have added My Little Video. Five days a week, they bring me a short film of two or three minutes – sometimes in French, sometimes not, but always delightful. I have started my classes with a short video for the past few years (students actually rush to get to class on time!) and sometimes finding worthy material is tough. Thanks to this new source, I have a pre-screened stream of high quality videos to share.

One of my favorites lately was the amazing Badoit Express; the bottled water company served a gourmet meal to four hundred people on the Paris metro, complete with tablecloths.  I also loved the JT of Facebook, where a newscast was re-done with all the lingo of Facebook that has become part of our world in just a few short years. JT (zjee tay) stands for journal televise (zjoornal tay-lay-vee-zay), or literally a televised newspaper. La danse de la rentrée was simply beautiful and mesmerizing as pencils animated a music video produced with stop-action techniques. Through another video, I learned the story behind the Keep Calm posters.

While you watch, you’ll probably pick up a new vocab word or two. I learned that a hipster is un branché (uhn brahnshay), but I’m still not really clear on what a hipster is, to the amusement of my students. Oh well, it’s good to let them teach me sometimes. And I feel a little more hip myself just knowing the French word for hipster, even if I can’t spot one.

Patricia Gilbert is a French teacher. She's Canadian, lives in the United States, but dreams of living in France. Follow her on Instagram @Onequalitythefinest and on Twitter @1qualthefinest.
View all posts by Patricia Gilbert →
This entry was posted in Media and tagged French language, hipster, My Little Paris, My Little Video, Short film, un branché. Bookmark the permalink.