Posted on November 18, 2012 by Patricia Gilbert 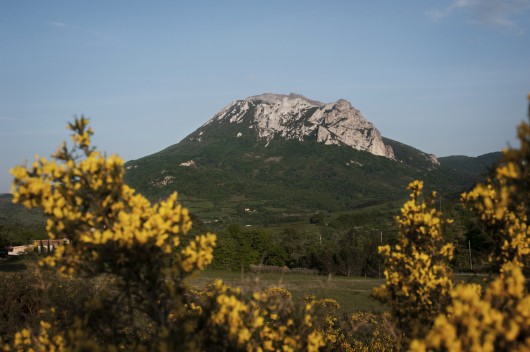 We’ve all heard the predictions based on the Mayan calendar that the world is supposed to end shortly, specifically between December 21 and 22, 2012. Apparently, however, the mystics have also predicted that certain zones will be apocalypse free. A mountain in the Aude region of France, known as Pic de Bugarach, is getting so much attention that the mayor of the town at its foot, Bugarach, has declared it to be off-limits for three days prior to the Big Day and for a couple of days afterward – if we’re all still here. Rumors had it that 100,000 of the faithful were planning to descend on the tiny community that normally has only 200 souls in residence.

What makes it so special? The mountain near the Spanish border is geologically interesting in that the rock at the summit is older than the rock at the bottom. According to the “esoterics,” aliens living in a spacecraft will emerge from the mountain and save them from the wrath to come if they will leave earth with the extraterrestrials. This is the Cathar region of France, noted for religious heresy going back to the 13th century. According to tradition, the Knights Templar hid the Ark of the Covenant here. Or maybe it was the Holy Grail? Or maybe it was just a rich Cathar treasure? The rumors have bred rumors. I wonder if Dan Brown knows about this? This has got everything he needs for another conspiracy thriller.

The “illuminés,” or enlightened ones, have become increasingly present over the course of the year, although the New Age folk have been fond of Pic de Bugarach since the 70s. According to the préfet (regional representative), 20,000 apoco-tourists came in the first half of the final year of earth’s history. He also reports strange rituals. And it’s not just a matter for smiles. Within the French government, a committee has proposed that the believers may even stage a mass suicide.

Today’s expression, la fin du monde (lah fahn due mond), means “the end of the world.” I’m still planning for Christmas. How about you?

Read more about the fascinating history of this region in The Crusade Against the Grail: The Struggle between the Cathars, the Templars, and the Church of Rome