Posted on December 6, 2012 by Patricia Gilbert

French Impressionist painter Jean Frédéric Bazille was born on December 6, 1841. His wealthy family lived in Montpellier, in the south of France. He was inspired to pursue painting after seeing Eugène Delacroix’s work, but his family wasn’t too supportive. Studying medicine was a condition for studying art as well.

Bazille moved to Paris where he met Renoir and Sisley. Failing his medical exams decided his fate, and he began to study art full time. He used his wealth to help support his friends by allowing them to paint in his studio and use his materials. He was primarily a painter of people, but he embraced the concept of painting en plein air rather than in the studio. 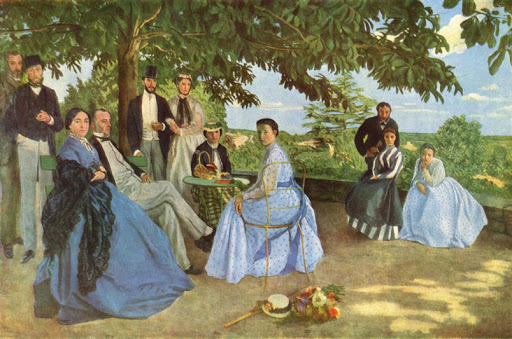 When the Franco-Prussian war broke out, Bazille joined up right away. He died in battle on November 28, 1870 at only 28 years of age. Who knows what he might have achieved? As it is, his paintings hang in the musée d’Orsay as well as other great collections. That’s Bazille’s portrait of his friend Renoir, below.

Read more about the friendship between Monet and Bazille