If you enjoy fashion, you will find plenty to interest you in Tim Gunn’s Fashion Bible: The Fascinating History of Everything in your Closet. Admittedly, I live under a rock as we don’t have a functioning TV, so you probably know Gunn far better than me from one of the programs where he serves as a fashion consultant, such as Project Runway. I just know Gunn from his books, the most recent of which is a comprehensive history of each item of clothing in your closet or dresser. While Gunn’s vestimentary taste is beyond reproach, it must be said that he is no fan of France. As a loyal American, he clearly prefers the red, white, and blue to the bleu, blanc et rouge. I must admit that I find it amusing when he must confess that the origin of yet another facet of fashion owes its existence to la belle France. 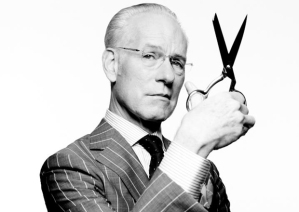 The strengths of the book are the meticulous research and Gunn’s own engaging style that makes fashion history come alive. Every assertion is carefully footnoted and tied to a comprehensive bibliography. Each chapter is devoted to a separate item of clothing, starting with our undies and finishing with purses. He starts with the origins of each piece and then traces the development to the latest styles and designers. The back of the book consists of worksheets to help you take stock of your own wardrobe.

There are many fascinating tidbits. Did you know that the reason that men’s and women’s shirts are buttoned on opposite sides is due to a prohibition in Deuteronomy about women wearing men’s clothes? This was also one of the charges leveled against Jeanne d’Arc before she was burned at the stake. Gunn traces the origin of knitwear to chain mail, noting the relationship of the French word maille (knitwear) to knight-wear. 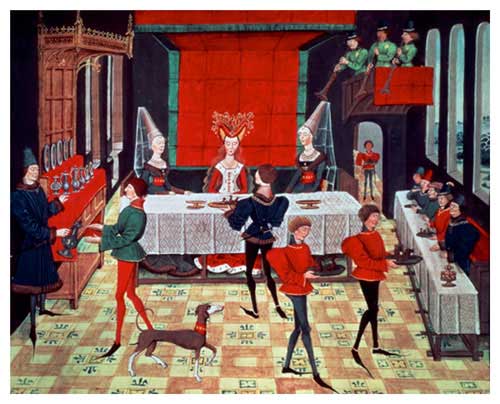 I also enjoyed the many illustrations in the book, one of which was a reproduction of a medieval French banquet. I’d studied this work of art in a grad school course on the history of French gastronomy. Gunn used a detail of it to focus on the footwear of the servants – slippers known as poulaines with extremely elongated toes. These were the precursors to a pair of red sling-backs I bought in Paris several years ago with the longest, pointiest toes in my closet. I’ll enjoy them all the more now that I know about their medieval French origins.

Today’s expression, contre son gré (kontruh sohn gray), means “against his will.” I don’t think that Gunn will ever become a Francophile from the way each admission of the dominance of France in the fashion world is wrung reluctantly from his pen, but he must be congratulated for his thoroughness and fairness in creating a book that is educational as well as entertaining.

Patricia Gilbert is a French teacher. She's Canadian, lives in the United States, but dreams of living in France. Follow her on Instagram @Onequalitythefinest and on Twitter @1qualthefinest.
View all posts by Patricia Gilbert →
This entry was posted in Fashion, Literature and tagged contre son gré, Fashion, France, Gunn, Project Runway, Tim Gunn, Tim Gunn’s Fashion Bible: The Fascinating History of Everything in your Closet. Bookmark the permalink.