Big news! France just won the Bocuse d’Or (bokooz door) culinary competition in Lyon. The competition has been held every other year since 1987. It bears the name of celebrity chef Paul Bocuse who founded the competition. A panel of 12 celebrity judges taste their way through the best food in the world prepared by the best chefs. 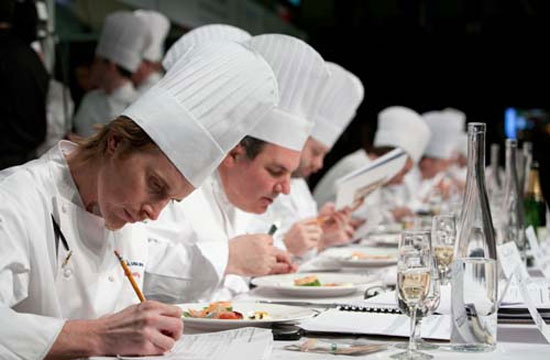 This is no chili cook-off. It’s a two-day contest with teams from 24 countries. Each chef has exactly five hours and 35 minutes to prepare a beef platter as well as one with seafood, in addition to vegetable garnishes. Those final hours are the last step in four years of training. It’s the gastonomic Olympics.

Before this win, France had scored gold several previous times (as well as silver and bronze), but they’d come up short of the top prize since 2007. The French team was captained by Thibaut Ruggeri of Maison Lenôtre who walked away with 20,000 Euros in prize money in addition to the statue in the likeness of Bocuse.

Patricia Gilbert is a French teacher. She's Canadian, lives in the United States, but dreams of living in France. Follow her on Instagram @Onequalitythefinest and on Twitter @1qualthefinest.
View all posts by Patricia Gilbert →
This entry was posted in Cuisine and tagged Bocuse, Bocuse d'Or, France, Maison Lenôtre, Paul Bocuse, Thibaut Ruggeri. Bookmark the permalink.