Posted on August 3, 2013 by Patricia Gilbert

There she is! And there! And there! There are so many variations of the Statue of Liberty in France that it seems like the Bronze Lady is around every corner. You probably already know that she was a gift to the United States from the people of France to mark the centenary of the American Revolution, created by Frédéric Auguste Bartholdi, of Colmar. Today, I’ll focus on the replicas that are in Paris.

First, there’s the bronze model that stands in the Jardin du Luxembourg. Bartholdi used it when preparing the full-sized model. He gave it to the Luxembourg museum in 1900 and it has been installed in the park since 1906. It’s only ten feet tall, or 1/16 the size of Mama. It bears the original title that Bartholdi intended for the statue “La Liberté Éclairant le Monde” (lah leeb-er-tay ay-clare-ahn luh mohnd), or “Liberty Illuminating the World.” 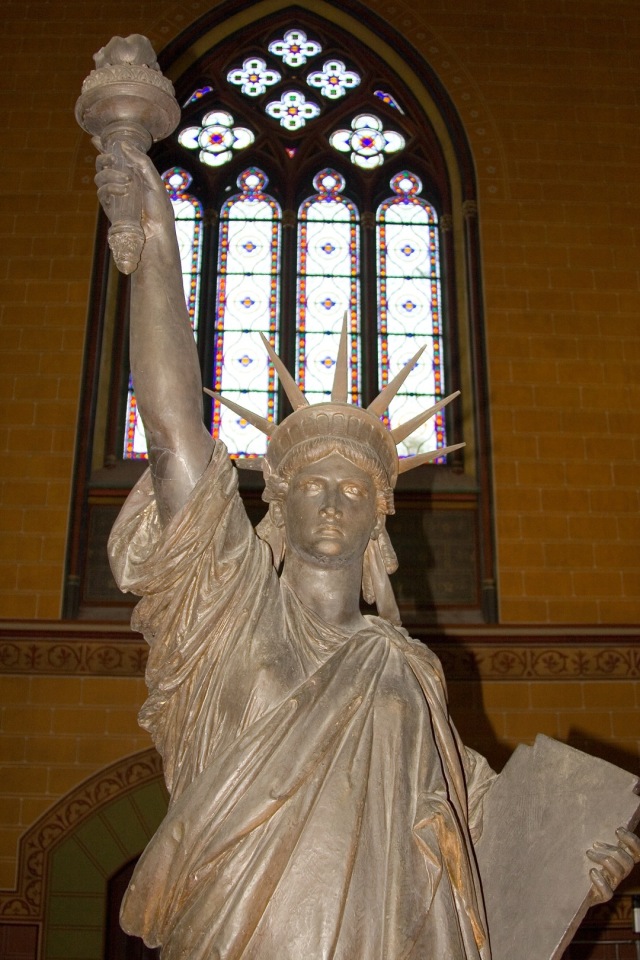 Then, there’s a larger version on the Île aux Cygnes in the middle of the Seine, but it’s still only about ¼ of the size of the original. The Committee of Americans in Paris gave it to the city in 1889 on the centenary of the French Revolution. I took a dinner cruise with students, and as we rounded the island, the the American national anthem was broadcast over the sound system, to the appreciation of many of the tourists, including my group. The statue makes a cameo appearance in the adventure film National Treasure: Book of Secrets. Originally, she was turned facing the other way, so as not to turn her back on the Élysées Palace, home of the French president. Bartholdi wanted her turned around to face New York and he finally got his wish in 1937 (long after he was no longer around to enjoy his triumph).

Another replica is in the Musée des Arts et Métiers in the Marais. It’s a plaster model of the same statue that’s in the Luxembourg. It was a gift from the artist’s estate from Bartholdi’s widow.  The museum used this plaster to cast twelve copies in bronze, one of which is outside the museum. 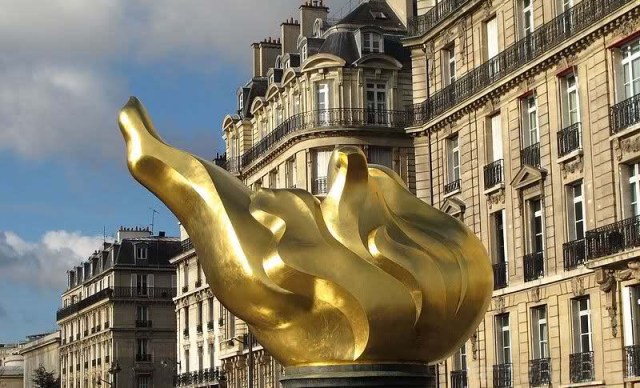 A part of the statue, just a life-size copy of the flame is mounted outside the Pont de l’Alma tunnel on the opposite side of the river near the Eiffel Tower. It was a bounce-back gift from the US to France on the occasion of the 100th anniversary of the statue’s dedication. It is in this same tunnel that Princess Diana had her fatal car crash, and many people believe that it is a memorial to her.

Another day, I’ll talk about the many other Ladies of Liberty throughout France.

Lady with a Past: A Petulant French Sculptor, his Quest for Immortality, and the Real Story of the Statue of Liberty

Patricia Gilbert is a French teacher. She's Canadian, lives in the United States, but dreams of living in France. Follow her on Instagram @Onequalitythefinest and on Twitter @1qualthefinest.
View all posts by Patricia Gilbert →
This entry was posted in Travel and tagged Bartholdi, Frédéric Auguste Bartholdi, Jardin du Luxembourg, Paris, pont de l'Alma, Statue of Liberty. Bookmark the permalink.