I think our happiest food discovery while we were in Québec City was Le Billig crêperie, located at 526, rue Saint-Jean, just down the road from the Hobbit bistro. Our daughter, a foodie, found it on Yelp.com. We went there for a late lunch, but the unpretentious little crêperie was still quite full. The waitress pulled two little tables together on a perch a few steps above the main dining area to make a place for us.

I love crêpes. Crêpes in Paris. Crêpes in New York. Crêpes in restaurants. Crêpes from street vendors. But most of all, crêpes in Brittany, their true home. I love buckwheat crêpes, known as galettes, used for savory, main-course crêpes. And I love dessert crêpes filled with fruit, or Nutella, topped with nuts. So, how to choose a crêpe from among the tempting options at Le Billig? I wanted a dinner crêpe AND a dessert crêpe. I choose a crêpe that mixed elements of both – sliced ripe black figs, mozzarella cheese, basil, pecans, and a drizzle of a balsamic reduction. Sincerely, it was one of the best I have ever had, although totally non-traditional. My husband had the classic smoked salmon crêpe, finished with crème fraîche, capers, and lemon. I wasn’t surprised to learn that the chef was Breton. These crêpes were simply excellent and the price was extremely reasonable.

So my advice to you is that, if you are in Quebec City, venture a few blocks outside the encircling arms of the stone wall when it comes to meal times. The best meals we had were just outside of the highly frequented tourist zone. Within the walls, there were even crêperies where the staff was forced to wear embarrassing faux-Breton outfits. Why settle for faux when you can have a real Breton cook for you just a few steps away? 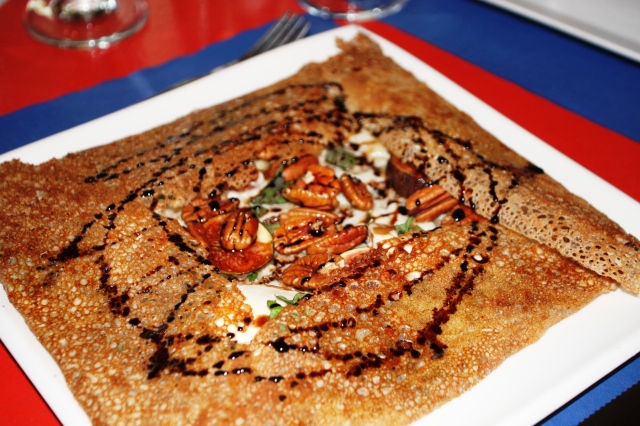 One question remains: what is a billig? It’s the name in the Breton language for the heavy, round cooking surface where the humble crêpe is born. In more standard French, it’s a galétière, galettoire, or crêpière. Traditionally, the billig was placed on a metal tripod that allowed it to be placed right in the fire. And for another essential crêpe word, un rozell is the wooden blade that evenly spreads the batter across le billig for that perfect, crisp crêpe. And now I’m hungry for a crêpe. If only Le Billig was always around the corner!

Patricia Gilbert is a French teacher. She's Canadian, lives in the United States, but dreams of living in France. Follow her on Instagram @Onequalitythefinest and on Twitter @1qualthefinest.
View all posts by Patricia Gilbert →
This entry was posted in Cuisine, Travel and tagged Brittany, Crêpe, Le Billig, Montreal and Quebec City (Frommer's Walking Tours), Quebec City. Bookmark the permalink.