She had long been abandoned after her hours of glory at the beginning of the 30s. La piscine Molitor (lah pee-seen mol-e-tor) in Paris had mythic status. But after the investment of 80 million euros, she has come back to life.

Here’s the Molitor, version 2014. The summer pool, the changing cabins, and the winter pool are gloriously restored. An 85 year-old Art Déco gem in the heart of Paris. After two and a half years of work, the Molitor pool has become a place of private luxury. For 150 Euros a day, you, too, can spend the day beside the mythic water. Because it’s classified as an historic site, the Molitor has been restored exactly as it was – the yellow walls, the blue changing rooms doors, the white concrete guard rails are all identically restored or reproduced from original molds.

In less than a century – a blink of the eye for Parisian buildings – the place has had several lives. After the war, it was THE Parisian pool where one went to be seen, for just a few francs more than a more ordinary pool. It was here that the bikini made its first appearance. Here’s a video of a swimsuit competition. It was here that Parisians first dared to go topless. There was even a skating rink on top of the summer pool in the off-season. Rented skates and romance. Always a winning combination. 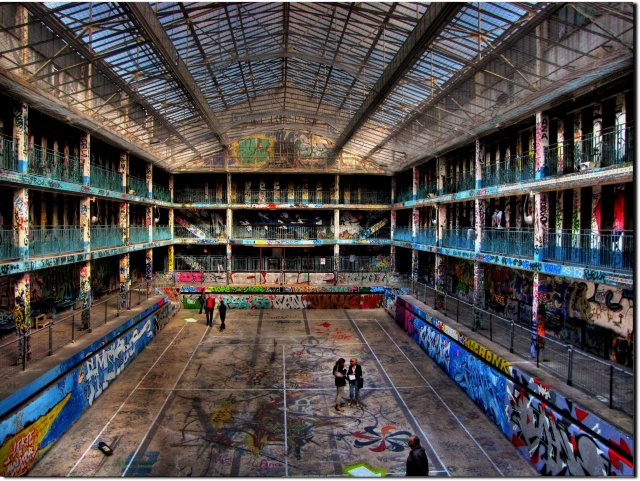 By 1989, the pool was no longer economically viable and was closed. Graffiti artists took over and transformed it into the cathedral of street art. Twenty-five years later, the Molitor is renovated, but not sanitized. The artistic period is preserved inside the changing rooms. They are now mini exhibition sites. The same is true of the basement, where street artists are allowed free reign with their spray cans and paint brushes.

The last step in the transformation is the creation of a luxury hotel above the pools. The hotel has 124 rooms with a view of the pool. The average price is 300 Euros a night. The Molitor is ready for a new page in its storied history.

Patricia Gilbert is a French teacher. She's Canadian, lives in the United States, but dreams of living in France. Follow her on Instagram @Onequalitythefinest and on Twitter @1qualthefinest.
View all posts by Patricia Gilbert →
This entry was posted in Travel and tagged la piscine Molitor, Molitor pool, Paris, Paris graffiti artists, Paris pool, Paris street art. Bookmark the permalink.