Posted on November 9, 2015 by Patricia Gilbert When I was in the Met on my way to the Grand Illusions exhibit, I was stopped in my tracks by a black and white photo of a boy with a cat entitled Garçon avec un chat dans les bras appuyé contre une vitrine (gar-soon ahvek uhn shah ap-we-ay kohn-truh oon bit-reen). This very long title means “Boy with a cat leaning against a shop window.” The boy is clinging to the cat like it’s all he has in the world and he thinks you’re going to try to take it from him. When I read the card, I found the name of a photographer who was new to me, French-born Dora Maar (1907 – 1997). 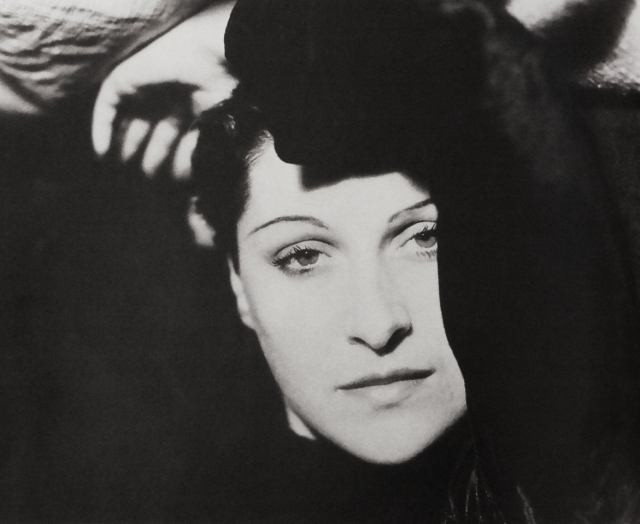 Born Henriette Theodora Marković in Tours, she is best known as Pablo Picasso‘s muse, although she was a poet, photographer, and painter in her own right. She was Picasso’s model for Guernica and The Weeping Woman. She also painted parts of Guernica herself. Her photography became celebrated for her series of images of Picasso working on his monumental war painting.

At age 19, Dora entered the Académie Julian, an art school that was open to women, and adopted her shortened name. She studied both photography and painting but eventually made photography her full-time pursuit. She worked as a commercial photographer, specializing in advertising, but in her own time, she took street photos, like the one at the Met.

Dora Maar met Pablo Picasso for the first time while she was working as a set photographer for director Jean Renoir. Picasso was 54 years old while Maar was 28. It wasn’t until their second meeting at Les Deux Magots, however, that Maar caught the artist’s eye. Maar splayed her hand on a table and rapidly stabbed between each finger with a knife. When she knicked herself, Picasso kept her bloodstained gloves as a souvenir. This was no ordinary woman. Is it any wonder that when Picasso painted her, he chose acidic colors and angular shapes? Maar became the rival of Picasso’s mistress and he encouraged the women to fight one another for him. What an ego! For better or for worse, Maar won.

During the tempestuous decade of their relationship, Picasso painted and sculpted Maar several times. Dora Maar au Chat (Dora Maar with Cat; 1941) was sold at Sotheby’s for over $95,000,000, making it one of the highest priced art sales in history. Maar was tormented by Picasso’s infidelity and her own infertility. Ultimately, Picasso had her committed to an institution. When she was able to leave, he gave her a house in Provence. Maar became involved in a mystical form of Catholicism. She is quoted as saying, “After Picasso, God.”

After she left the institution, Maar returned to painting and took up poetry. She then began to take photographs again and exhibit her work. Since she and Picasso shared the same circle of friends, inevitably their paths crossed. They took a perverse delight in tormenting one another with bizarre “gifts.”  The relationship that began with a knife and bloody gloves perpetuated itself with less visible wounds.

Picasso’s Weeping Woman: The Life and Art of Dora Maar

Patricia Gilbert is a French teacher. She's Canadian, lives in the United States, but dreams of living in France. Follow her on Instagram @Onequalitythefinest and on Twitter @1qualthefinest.
View all posts by Patricia Gilbert →
This entry was posted in Art, Photography and tagged Dora Maar, Pablo Picasso, photographer. Bookmark the permalink.