Déchéance (day-shay-ahnse) is a hot topic in France these days. It refers to rescinding French citizenship to those who were naturalized as citizens after immigrating. It is currently only available as a punishment when people who hold two citizenships and have been French for less than ten years commit a serious crime. In the wave of terrorist attacks in France, François Hollande’s government is proposing that déchéance be extended to those leave to commit acts of jihad abroad or who engage in terrorist acts in France. 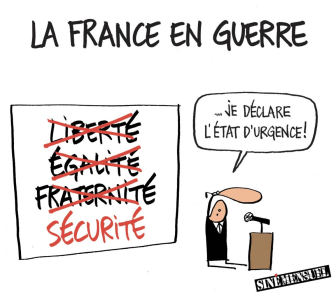 The effect of this would be to create people who have no nationality it all. The measure, which would require a constitutional amendment, appears to be designed to curry favor with the far right, perhaps after the strong performance of the Front National in the first round of the regional elections in late 2015. Curiously, the Justice minister, Christiane Taubira, who is tasked with promoting the change, loudly and publicly opposes the measure. After all, the Partie Socialiste is supposed to be politically on the left, not the far right. Affaire à suivre. (To be continued.)

Patricia Gilbert is a French teacher. She's Canadian, lives in the United States, but dreams of living in France. Follow her on Instagram @Onequalitythefinest and on Twitter @1qualthefinest.
View all posts by Patricia Gilbert →
This entry was posted in Events, French Vocabulary and tagged Christiane Taubira, déchéance, François Hollande, rescinding citizenship, terrorism. Bookmark the permalink.