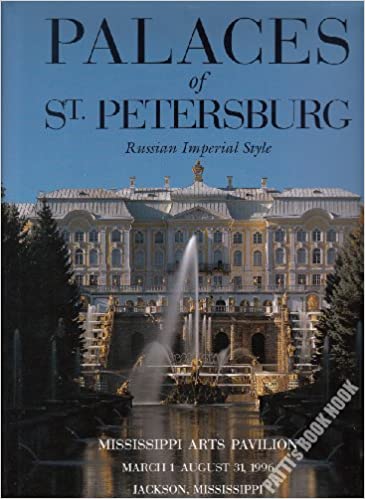 I have a very nice husband. Not long after we moved to the States in the mid-90s, I saw an article about an exhibit dedicated to Russian Imperial treasures. Having been fascinated by the Romanovs for many years – even our bedroom was festooned with fabric adorned with Faberge eggs – I naturally wanted to see this exhibit. The only small catch was that it was in Jackson, Mississippi, and we were in southern New Jersey. We decided to have a road trip, taking in a few other stops along the way.

Off we went: one patient husband, one perplexed six year old, and one enthusiast of all things Romanov. We stopped at the Stephen Foster show in Bardstown, Kentucky in hommage to a trip my husband had taken in his childhood. We drove all 500 miles of the astounding Natchez Trace and gawked at alligators in cypress swamps. We toured historic homes in Natchez, Mississippi and stumbled serendipitously upon a fabulous exhibit dedicated to the Chinese terra-cotta soldiers when driving by Birmingham, Alabama on our way home. But how was the main event?

Truth be told, I’ve forgotten a lot of the specifics. I remember that entire rooms from the Imperial palaces of St. Petersburg were re-created by exceptionally skilled Russian craftsmen, from intricate parquet flooring to gilded ceiling medallions and that objects were placed in the rooms as they would have been arranged in the actual palaces. I remember the vast display of china belonging to Catherine the Great on a banquet table, as thought the guests were about to be seated. And of course, I remember the enormous coronation coach. In the gift shop, we bought a few mementoes, including something for that long suffering six year old. One of our purchases was the exhibit catalogue, Palaces of St. Petersburg: Russian Imperial Style. As one does, we put the book on a shelf and never looked at it.

My biggest takeaway from reading Marie Kondo was that books that weren’t read didn’t “spark joy” and should move on to new homes. I announced a general moratorium on new book buying (for me) and selected twelve books a year from the backlog. This year, the exhibit catalogue was in my stack and one advantage of living in a world that is temporarily on-hold is more time than usual for reading. Memories of the trip came back, to be sure, but I also made connections with exhibits or collections I’ve seen since, such as Marjorie Merriweather Post’s home in Washington, D.C. that I visited a few months ago in a time just before anyone was talking about Covid-19. 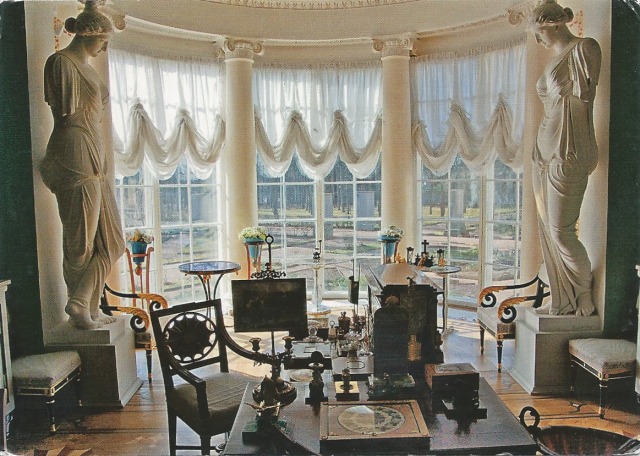 The catalogue also highlighted the influence of French art on this northern Russian city. Peterhof, the palace built by Peter the Great, was built to rival Versailles. Catherine the Great imported artisans from all over Europe to train local craftsmen so that Russia could enjoy the same artistic and cultural adornments as other countries. Other pieces of the French decorative arts in the palaces had been diplomatic gifts, such as the tapestry given to Alexander I by Napoleon or the mirror given to an Empress by Louis XV. If you removed all the clocks, candelabras, mirrors, and furniture by French craftsmen, there would be a lot less glitz and glamor in the Palaces of St. Petersburg. 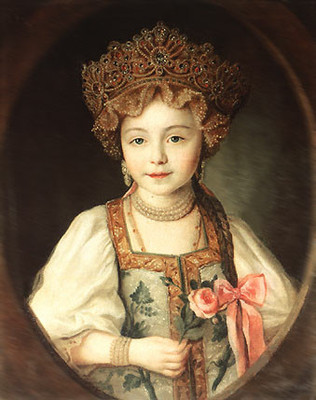 Another lesson of the book is the terrible toll that political conflicts take on the objects and places that represent our cultural heritage. Although the palaces were officially transformed into museums after the Russian Revolution of 1917, the Bolsheviks sold many Imperial treasures in the 1930s, including the heiress Marjorie Post. Then came occupation by the German army in World War II. While many treasures were hidden during the war and then returned to their rightful places afterward, others were destroyed or spirited away. The work of rebuilding and restoring the palaces started right after the war. As of the time of the exhibit, many were only about halfway finished.

Some of the palaces have been enhanced replacing lost treasures with similar pieces that were in other collections throughout Russia. Some pieces have been bought back from collectors; others have been painstakingly restored. The most amazing restoration story was the intricate damask in the Portrait Hall of the Catherine Palace that adorned both walls and furniture. Although hundreds of examples were scrutinized from the best European manufacturers, none could rival the original. Since no modern machines were capable of reproducing the complex weave, the decision was simple, recreate an 18th century loom. Now the Portrait Hall looks the way Catherine the Great would have seen it.

I wish I could use a way-back machine to return to that exhibit to see it with fresh eyes. Failing that, a visit to St. Petersburg remains on my list of dream destinations for a time when we can once again enjoy the luxury of traveling freely. Until then, I found this lovely film about the exhibit for us all to enjoy. Stay safe, stay home.

Patricia Gilbert is a French teacher. She's Canadian, lives in the United States, but dreams of living in France. Follow her on Instagram @Onequalitythefinest and on Twitter @1qualthefinest.
View all posts by Patricia Gilbert →
This entry was posted in Art, History and tagged Imperial palace, Palaces of St. Petersburg, Romanov. Bookmark the permalink.